A Path with Heart: 17 amazing things about Singapore 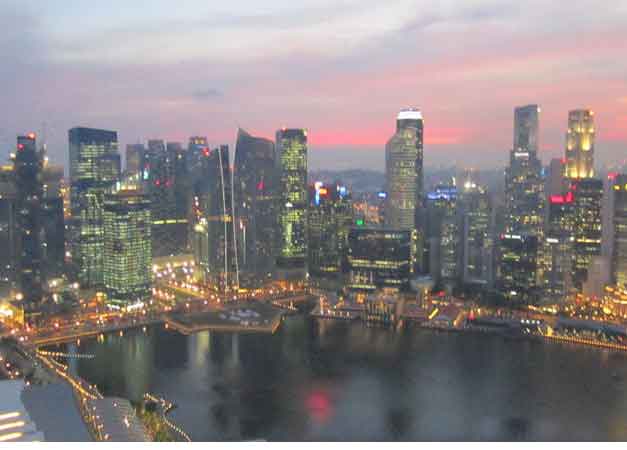 I recently traveled to Singapore. Here are 17 things that amazed me about it.

This is a city of buildings. Due to the lack of space, most people live in apartment buildings.

People dry their clothes on poles hanging from their windows. I thought if I tried drying my clothes this way, I might drop the pole, and it would hit someone, but a local told me, “Oh no, in few days you will be a master at handling the poles.”

Singapore is a very diverse city. On the subway, I noticed that one person was reading a newspaper in English, another in mandarin and a third in Hindu. Locals told me that at school everybody has to learn two languages: English and mandarin, or English and a language from India.

Singapore was a British colony so their English is more British than American. For example, they call a cell phone – a hand phone; a plastic bag – a carrier; an elevator – a lift; gas is petrol; floor is level; vacations are holidays; glasses are spectacles, and the list goes on and on.

Singapore is a very small country. Therefore they do not produce anything; they import everything.

Many Indians immigrate to Singapore for work, mainly in construction. In Singapore’s Little India, I saw long lines of laborers outside of Western Union, waiting to send money to their families.

The steering wheel is on the right. Gas (or Petrol) is very cheap in comparison to California’s gas. Therefore taxis are very cheap, and they are a high demand. Public transportation is excellent: the subway (MRT) is cheap, and it has air conditioning. I wish California’s transit system was as good.

At the entrance of subway stations, I saw elderly musicians. A local told me that they were not beggars; they were artists who had asked permission from the government to play their instruments at the subway. They do not beg for money, but people give donations.

What I liked most about Singapore is seeing green everywhere. I had the opportunity to see the most beautiful orchids in their National Orchid Garden.

I knew that there was a $500 fine for throwing chewing gum on the street, but it was news to me that they don’t even sell gum. Cleanliness extends inside buildings too: when you enter an apartment or a place of worship, you have to take off your shoes.

I felt safe all the time, wherever I went. I rarely heard the sound of ambulances or police patrols. There are public signs that say that even though the crime rate is very low, people should still be cautious. I felt even safer when a taxi driver told me, “We do not have earthquakes or tsunamis”.

Beware of the Sun

Women of all ages are afraid of the sun, and they are always armed with umbrellas.

Many people call Singapore Disneyland because everything seems perfect, but I think it should be renamed, Fantasy Island. Although everything seems perfect, I sensed that people lack freedom. They do not have freedom of the press and one party has been in power for forty years. Also, I suspect that a significant percentage of the elderly is impoverished. When the temperature and humidity rose, elderly men walked around without a shirt, and they looked very, very, skinny − like they didn’t have enough food.

I saw very few fat people. Locals eat a lot of noodles, white rice, and eggs. I believe their portions are smaller and they are more active than Americans.

There are fruit stalls all around the city. The fruit is clean and ready to eat. The fruit lover in me was very happy with that.

I found a coffee shop in which you don’t have to pay. Everything is by donation: the coffee, the lattes and the delicious cappuccinos. You can read the daily newspaper (free), relax and talk. And you pay whatever you want. The cafe has been open for one year.

Singapore doesn’t have beaches, so they created one on Sentosa Inland with artificial sand brought in from Indonesia. Unfortunately, from the beach, you can see Indonesia’s oil tanks, but that didn’t stop me from gazing at the sea for hours.