A Path with Heart: The woman in black 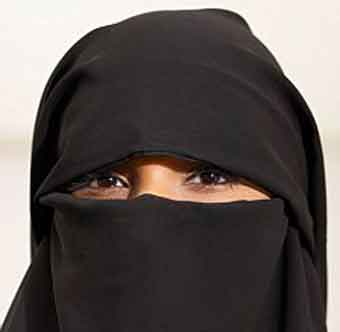 Over and over again, the woman pressed her veil to the bridge of her nose as if she was afraid that it would slip and reveal her face. She was covered from head to toe in a black fabric. Her brown eyes were the only visible thing about her, and they were extremely beautiful: brown, big and with curly eyelashes.

I was waiting in line behind her at a clothing store in Kuala Lumpur, Malaysia, where 60% of the population is Muslim. There I saw many Muslim women with their heads and necks hidden by a veil. It was in this city, that I saw for the first time in my life, women covered from head to toes.

The woman was buying three expensive purses. She spoke in a foreign language with the cashier, who was dressed like any occidental women, but whose head and neck was covered with multi-colored veils. I wanted to ask the woman in the burka, about her dress, her traditions, and her feelings, but I did not have the courage to do it. I did not want to be disrespectful. I also didn’t know if she spoke English. The woman’s husband, who was dressed like an American in shorts and sandals, gave his wife money to complete her purchase. Their three little ones ran around them. Their little girl wasn’t wearing a veil nor a black robe.

Looking at her, I wondered if this woman bought so many purses because it was the only way she could show off in public. At the end, we are women, and we have different levels of vanity. I wondered what she wore at home; I heard that women wear black robes outside to protect themselves from the eyes of men and to avoid temptation. Some women say they are happy to wear them because it makes people appreciate them for who they are and for their values, rather than for their looks. But I think a pair of beautiful eyes can also be a temptation. I also ask myself how can a Muslim man in Malaysia have four wives under the same roof? A Hindu taxi driver told me that.

Well, I am very respectful of other cultures and faiths, but when I saw this woman, with the beautiful eyes, pressing her veil to her nose again and again, my throat swelled up, and my heart felt oppressed.

Back in America, once in a while, I think about the woman in black, and I wish I’d asked her all the questions that are still turning round my head.