Through a glass wall: a visit in jail 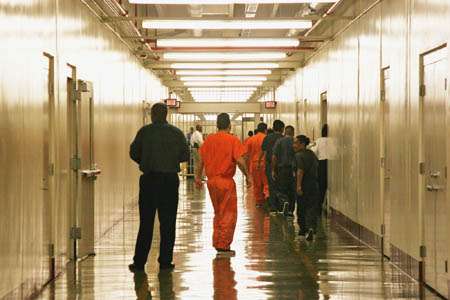 I talked to him through a thick glass wall when I visited him in jail. We talked over a telephone. I thought this kind of communication was reserved for murderers or high risk prisoners. I realized, it was also used for people who have broken immigration laws.

Miguel Araujo was one of the first community activist and advocates for immigrants’ rights whom I met when I came to this country eight years ago. For years, he organized hundreds of rallies and marches, demanding driver licenses for undocumented immigrants. He has been persistent is his demands for immigration reform.  He also owns a successful Mexican restaurant in San Bruno, home to the San Francisco International airport. He is the kind of leader who is very confrontational. He is not diplomatic at all. Often he says things without thinking. As a result, he has more than a few enemies.

I always thought that Miguel was a citizen on the United States. That’s why last September, my heart jumped when one of his closest friends called me in the middle of the night to let me know that he had been arrested by Immigration officers in his own restaurant.

Two weeks ago in a Saturday, I went to Marysville for a visit in jail. The day was sunny and a pleasant wind was blowing. Miguel looked like he lost weight, but he seemed happy to see me. I imagine that for prisoners visits are like medicine for the soul.

My first question was, “How do they treat you?”

“It is a decent treatment. But I do not like that they make us wear a red uniform, as if we were terrorists.”

“This is the jungle.”

“Why are your here? What was your mistake?”

“I was already a legal resident when I made a mistake. I became a drug addict. To keep my family from realizing what I was doing, a group of drug addicts and I rented two rooms in a Santa Rosa hotel. One day, police arrived and they found a few pounds of heroine. As I had money that day— about $1,000— from my restaurant, they decided that I was a drug dealer. They sent me to jail for 18 months. When I left prison, I was in probation for two years. After that they deported me, but that same day I reentered the country.”

“Why did you become a drug addict?”

“I felt very disappointed about politics and drugs were a way to escape to my frustrations.”

“What is going to happen to you if they deport you?”

“I will be a stranger in my own country. I have lived here for 30 years, 29 of those years I had my own restaurant. I have three children who are citizens.”

I noticed that there were many Hispanic women with children speaking to Hispanic prisoners through a glass window in other cubicles.

I asked Miguel, “Are most of the other immigrants who are arrested Hispanics?”

“Most of them are, but many are also from the Philippines, China and there is one from Russia.”

“Don’t you feel suffocated by these walls?”

“Many times, the other prisoners and I have cried together from feeling hopelessness and despair at our situation and at our inability to help our families. Many of them can’t even speak Spanish well.”

I heard a voice, saying the visitation will finish in five minutes.  I left the prison, feeling sad for Miguel.

But one thing cheered me.  Even in prison, he kept his spirits high and his strong character intact.

Three days later, I got another late-night call.  Miguel Araujo was released from prison with an electronic bracelet, pending his immigration trial.  I talked to Miguel over the phone again. This time there was no glass wall between us.  “What are your chances to stay in the country?”

«Getting out of jail was half the battle», he told me enthusiastically.