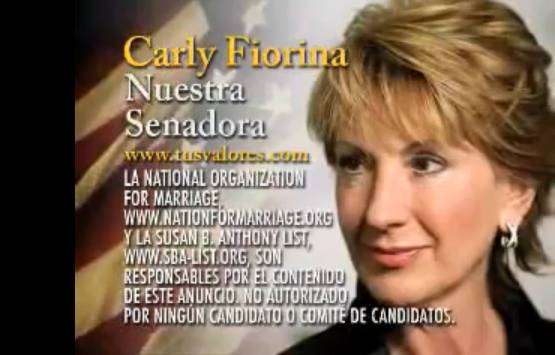 In a desperate attempt to win the votes of the Latino community, today the National Organization for Marriage (NOM), the anti-gay extremist group fervently focused on denying same-sex couples the right to marry, has released a Spanish television ad attacking U.S. Senator Barbara Boxer for supporting the right for same-sex couples to marry.

The ad (see at the end of this post ) falsely argues that Latinos oppose the freedom to marry for same-sex couples and that Senator Boxer opposes comprehensive immigration reform.

These allegations, however, are complete lies. The truth is that a majority of California’s Latinos now support basic rights for lesbian, gay, bisexual, and transgender (LGBT) people as well as the right to marry. Additionally, Senator Boxer, a leading champion of full equality for all, has long fought for comprehensive immigration reform.

NOM’s ad is based on the false premise that because the majority of Latinos identify as Catholic and Christian, they oppose civil marriage rights for same-sex couples by default. Yet we know that Catholic Latinos are among the most supportive groups of the freedom to marry.

In fact, in July, the Public Religion Research Institute released poll findings that show 57 percent of Catholic Latinos are supportive of the right for same-sex couples to marry.

Furthermore, the California Field Poll published in June also found that a majority of Latinos in California support the right for same-sex couples to marry. The misleading ad is not simply problematic because of the anti-gay messaging, but also because it attempts to scare Latinos away from supporting Senator Boxer by lying about her stance on immigration.

While the ad fabricates the notion that Boxer is not supportive of immigrant rights, the reality is that Carly Fiorina poses a huge threat to immigrants and Latinos.

Fiorina has publicly expressed her support for Arizona’s anti-immigrant law, SB 1070, which legalizes racial profiling and burdens local governments with the responsibility of criminalizing undocumented people (see video at the end of this post).

Yet conversely, Senator Boxer continues supporting legislation that promotes the basic rights of immigrants, including the Uniting American Families Act, which seeks to eliminate barriers for bi-national same-sex couples, as well as the federal DREAM Act, which she co-sponsored and would allow a path to citizenship for undocumented students.

The most troubling aspect about the ad is the inappropriate timing. As our country mourns the loss of the many students (about ten, not including unreported incidents) who tragically committed suicide because of anti-gay bullying, NOM has chosen to add fuel to the flame by ratcheting up its anti-gay rhetoric, which fosters a hostile environment that leads to bullying and hate-crimes against lesbian, gay, bisexual and transgender students. I am not exactly sure how NOM, the Susan B. Anthony List, the American Principles Project, and the rest of the anti-gay extremists who are behind this ad are able to sleep at night.

As a gay Latino, I know firsthand just how dangerous and painful seeing this type of anti-gay propaganda can be, especially when you are young. While Latinos along with other Californians need good jobs and solutions to our economic crisis, NOM and Fiorina have simply missed the mark. It’s time to put aside these ugly campaign tactics, and instead focus on creating economically stable, safe and healthy communities.