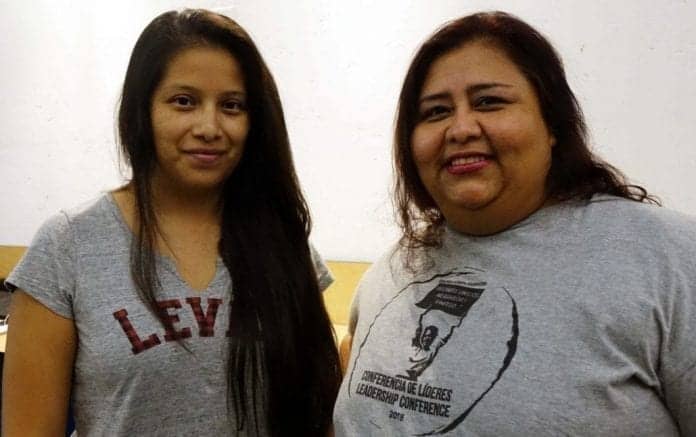 It’s not easy to be progressive in California’s Central Valley, where very conservative agribusiness interests control almost every single aspect of social and political life.

Economic inequality and extreme poverty loom for thousands of farm workers, while in many cities, council members are more concerned with passing resolutions imposing the motto “In God We Trust.”

Contenido ocultar
1 Not communist neither Marxist
2 A Latina as Editor
3 Promoting the Latino vote
4 A growing Spanish section
5 We opened, dozens closed

Not communist neither Marxist

In this context, it’s hard to believe there is a monthly publication in English with a Spanish section dedicated to political information and analysis from a progressive point of view —a concept that in general means to be on the “left,” however it doesn’t necessarily mean “communist” or “Marxist.”

The first edition of Community Alliance  was printed on September 20, 1996. It was a project of the Frank Little Chapter of the Labor Party of Fresno, and its project coordinators were John Veen, Pam Whalen, Mike Rhodes and Del Berg. John Veen was the newspaper’s first editor, and one year later Mike Rhodes took over. He remained editor for almost two decades until he retired in 2014.

“Community Alliance is really one of very few —if not the only— alternative news sources we have in the Central Valley that draws attention to issues and populations that go unnoticed, are ignored, or vilified by corporate media,” said Linda Kobashigawa, member of the Editorial Board of the publication. “That it has been circulating for 22 years (and free of charge!) is a testament to the enduring power of the alternative press.”

Camille Russell, also a member of the Editorial Board, agrees.

“It is a unique voice, we are the voice of the people you can’t hear in the mainstream media,” said Russell, who is known for her dedication to the peace movement in the Fresno area. “Even though we have limited resources, the team makes a great journalist job and we distribute it for free even at events, marches and demonstrations.”

A Latina as Editor

In April 2018, for the first time, Community Alliance named a Latina as Editor. Elsa Mejía, 29, is a journalist based in Madera, California —20 miles north of Fresno.

“I was attracted to journalism ever since I was a young girl. It was a way to inform my community and tell their stories,” said Mejía, born in Fresno from Oaxacan parents. Oaxaca is a Mexican state with a strong indigenous culture. “That’s why I started to write and contribute to college newspapers.”

Mejía says she feels proud to be Community Alliance’s editor, however she recognizes the challenge to be called “progressive” in a very conservative area with little political grassroots involvement, particularly among Latinos.

She graduated from the Mass Communication and Journalism Department at California State University, Fresno.

“Latinos don’t have a high level of political involvement,” she said. “I belong to Madera Votes, an organization that promotes voting. I see a lot of apathy in my community, many are not interested in local politics,” explained Mejía. “However, there are mothers who can’t vote, but motivate their children to do so. Mothers play a significant role in this process and kids should get involved because at a certain point we’ll be leading the future generations.”

For Russell, that arrival of Mejía as editor of Community Alliance is a positive step. “She is keeping the direction, the mission of the publication and at the same time she is maturing rapidly.”

“She brings a nice balance of experience with print journalism and skills in social and digital media. That meets the interests and preferences of our growing readership,” added Linda Kobashigawa.

In April 2011, Community Alliance started a one-page Spanish section which has been growing over the years, both in size and content. In September 2017, Lourdes Oliva became the editor of that section.

“Reading Community Alliance I learned things about our Central Valley I didn’t know. When I came back from a trip, I realized that there wasn’t a Spanish section anymore. When I asked why,  they told me because they didn’t have a Spanish editor,” said Oliva, 44. She developed her journalistic career at Radio Bilingüe in Fresno. “I volunteered to take over and they accepted, that’s why the Spanish section came back.”

Oliva arrived in Los Angeles at age 3 from her native Guatemala. At 14, her family moved to Reedley, south of Fresno. “It wasn’t easy to go form a big city to a small, rural and very conservative one,” she remembers. “By then I spoke mainly English, my Spanish was very limited.”

Like many teenagers from rural, impoverished communities, Oliva was close to becoming a high school dropout. But after having her only child, two school counselors helped her to complete her education and start a career as a radio DJ. She finally graduated from Reedley Community College with a degree in Journalism and Communication.

“I want the Spanish section of Community Alliance to inform, I see how people read it with interest,” said Oliva. “This is an independent newspaper. I wish also to create poetry groups. There are lots of opportunities.”

Community Alliance started the Spanish section when dozens of Spanish weeklies closed their doors during the economic crisis that affected this traditional industry.

“There is almost no newspaper in Spanish in the Valley like before,” said Oliva. “Sometimes you hear somebody saying Latinos don’t read, but the problem is that there is nothing to read. People value when there is something to read.”

The presence of two Latina journalists on Community Alliance, the historic progressive publication of Fresno, expresses the demographic and ideological changes in the area. At the same time it reflects the growing political involvement of women. Finally, a reaction to the consequences of the 2016 electoral results —the loss of civil rights, opportunities and freedom by those on the lower end of our society.

Expectations are high and political times difficult, however, Mejía and Oliva look forward with sureness and confidence.

Could It Happen in Americ...