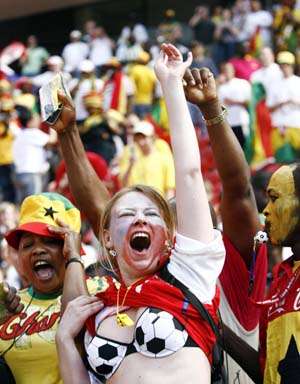 Every country, that is, except for these here United States.

For whatever reason it has never taken on the same fervor here that is so prevalent across the globe. I don’t know what the exact reason is for this. I was never that in to soccer coming up because no one was really all that in to soccer.

Sure I played on teams as a child but professional soccer matches were not televised nor did they get any mention during the sports segment of the news. Time I’ve spent abroad has at times coincided with some pretty big tournaments, like the World Cup and the Euro Cup and sitting in the pubs and cafes watching these games was as exciting and enthralling as any Super Bowl or Championship series I’ve seen here in America.

It is certainly a hell of a lot more engaging than watching baseball or golf on TV.

For the life of me, I do not understand why soccer has failed to take hold in America but I have a few theories. It could be that because soccer matches only have one break with no “time-outs” it does present a challenge for selling advertising spots. Halftime is the only opportunity to run commercials and although this is a much more cynical explanation it is a possibility.

Another reason might simply be the American mode of thinking. In a country founded by people looking to separate from European models and built by those looking for the next big thing, the newest frontier, the greatest opportunity matched only by the risk… Well, I guess what I’m getting at is that American audiences are rarely satisfied with a tie score and have little patience for low scoring games. At least hockey games come with fights.

You say football anywhere besides here and people think soccer. I’m not even sure how we got the name soccer though I understand the word originated in England to distinguish the sport from American football which was gaining popularity here. Even in Mexico where it might make more sense to call it pelota de pie, they call it  fútbol.

The game we know as soccer does come from Europe though there have been sports associated with kicking or carrying a ball in the Americas going back to the Aztecs.

They did have courts or fields with circular goals at either end but it would be presumptuous to say this game influenced soccer because the sport as we know it is generally thought to have been brought over from Europe.

The first recorded organized games with an agreed upon set of rules comes from England. It is widely believed that soccer was brought to Mexico by Cornish miners in the late 19th century. It was not much later that a league came about.

Futbol became a professional sport in 1943 and its most successful team  has been Guadalajara with 11 championship titles. Before that there had been professional teams but the league that is in place now has began in 1943. Internationally Mexico has hosted the World Cup twice but has never won. They do have a very respectable team.

Here in the United States soccer has been around for just as long but did not really start gaining popularity until we hosted the 1994 World Cup. The US soccer team did surprisingly well, advancing to the quarter finals but lost to Germany who would eventually take second place.

A couple of years later Major League Soccer got its start and many of the members of the US national team took spots in the 10 inaugural teams.

The US Women’s soccer team has been a powerhouse in recent years and has garnered much international recognition by winning two Women’s World Cup championships in the past 10 years.

Popularity of the new league went up and down with the national team’s success (or lack thereof at various times) but overall has gone way up from where it was.

In California in particular a couple of recent events have greatly increased the exposure of the sport. There was the addition of the expansion team Chivas USA (the Chivas is a very popular team in Mexico), and the recruitment of international star David Beckham.

Some would argue that bringing Beckham on board is sort of like the equivalent of taking Brett Favre over to play in Europe’s NFL:  he’s kind of past his prime but still has some skill and definitely will draw a crowd. Even still, despite its recent rise in attendance and viewership, the American soccer program is still in its infancy compared to the rest of the world.

This year’s World Cup, starting Friday,  is going to be held in South Africa; while the usual suspects like Brazil and Portugal are expected to do well, there are still high hopes for the teams here in North America. Mexico and the US are the second highest ranked teams in their respective groups but neither team is favored to win it all by any means. Still, it should be fun to watch.

On a personal note, every Mexican kid has played soccer growing up. I may have gone to school in Orange County but I knew the basics of soccer far before I understood football or basketball. This could also be due to my near complete lack of physical prowess. To my credit I did score the winning goal of the only game my junior high school team won. It wasn’t the highlight of my entire athletic career but it’s up there.