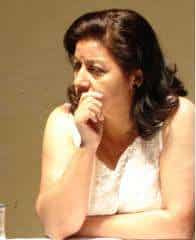 When finally reached by telephone, the very hard-to-reach Bertha Oliva was in the middle of a typically tragic day in post-coup Honduras. “ [The military and paramilitary operatives] just bombed a nearby labor union,” she said. Oliva leads the Tegucigalpa-based Committee for the Detained and Disappeared of Honduras (COFADEH), which is recognized worldwide as her country’s leading non-governmental human rights organization. “Fortunately,” she said, “all of the members of the union were at the burial of one of the boys the death squads killed on Saturday near El Paraiso [The Paradise], and no one was killed this time.”

“They are following our every move,” Oliva added. “They’re surveilling our offices and we’ve received threatening phone calls. And they make it extremely difficult or impossible to take water, medicine and food to all the people they’ve detained,” she said.

Ousted Honduran President Manuel Zelaya, while making camp at the Nicaragua-Honduras border last Friday, called for new protests in Honduras. This prompted U.S. Secretary of State Hilary Clinton to declare: “’President Zelaya’s effort to reach the border is reckless. It does not contribute to the broader effort to restore democracy and constitutional order in the Honduras crisis.”

When asked about Clinton’s statement, Oliva quickly responded, “Bombs are going off, people are being detained without due process, young men’s bodies are found with signs of torture and 45 stab wounds. [Clinton’s] declarations and her silence about human rights are strengthening criminals and signaling to those committing crimes against humanity that they can keep on doing it. Isn’t that ‘reckless?’”

“Instead of disqualifying Zelaya,” she continued, “Secretary Clinton should take actions in favor of democracy, in favor of constitutional order. That can really help us, that would be a great contribution.”

“Why don’t Mrs. Clinton and the Obama administration say anything about this, this ……terrorismo that the [de facto Honduran President] Micheletti and the coup backers are committing?” asked Oliva.

The questions and concerns raised by Oliva about the Obama administration’s policy towards the Honduran coup reflects what many fear is a growing distance between the Administration and the democracy movements backing the reinstatement of President Manuel Zelaya, who was ousted my the Honduran military on June 28th. Oliva and others fear that the Obama Administration’s handling of the coup may reflect the same willingness to overlook human rights violations that has characterized previous U.S. administrations.

Observers around the world question, for example, why the United States has chosen not to declare the Honduran putsch a “coup” in the legal sense, which would require stronger actions including a complete cutoff of military and other aid, withdrawing the ambassador and other measures the Obama Administration has refused to take.

Coup or not coup

Instead, critics both inside and outside Honduras, say Clinton and Obama have chosen a ‘good cop-bad cop’ strategy in which Obama gets to perform symbolic actions like declaring the coup “illegal” while Clinton gets to deliver the bad policy news to the media and the world about how the Administration has chosen not to designate the situation a “coup.”

In his own increasingly pointed responses, Zelaya noted that the possibility that the Obama administration may actually be enabling and strengthening the hand of those perpetrating the killings, torture and other human rights violations documented by Oliva and COFADEH. “The position of secretary Clinton at the beginning was firm,” Zelaya declared, “….now I feel that she’s not really denouncing (the coup) and she’s not acting firmly against the repression that Honduras is suffering.”

Oliva, Gilda Rivera of the Center for Women’s Rights, José Luis Galdamez, a journalist with Radio Globo and others fear that the Obama administration’s handling of the coup may reflect the same willingness to overlook human rights violations that has characterized previous U.S. administrations.

As she looks at the numbers and as she visits killing fields, prisons, private homes and other sites where human rights violations are taking place, Oliva said she couldn’t help but be reminded of the past.

She and her family founded COFADEH along with 12 other families that, like hers, had lost a family member disappeared by death squads linked to the U.S.-trained Honduran military. Her husband is still “disappeared,” she noted. “Some of the same businesspeople and military officials involved in the disappearances and killings of the 1980’s are the same people behind the coup today,” said Oliva. “And as happened back then, the United States government seems willing to back them politically by sponsoring talks that make the coup leaders look like legitimate partners to negotiate with.”

Oliva saved her most impassioned pleas for Hillary Clinton. “As a Honduran that has worked for justice her entire life, I ask Mrs. Clinton to listen to her heart and formally declare this a coup so that [coup leaders] know that her country stands for human rights,” she said.

“As someone who has sought the truth, I ask you, Mrs. Clinton not to hide the truth about what’s happening here. And, finally, as a creator of life, as a mother, I plead with you to put yourself in the shoes of so many mothers whose sons are victims of repression by the government. I know [the coup leaders] will listen to you. With God as my witness, I know it.”