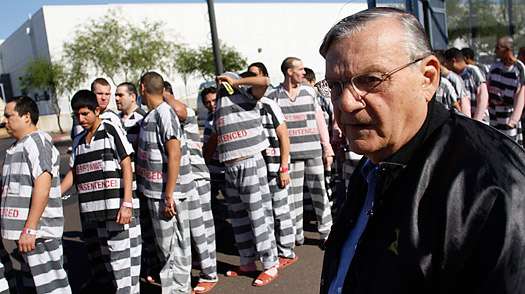 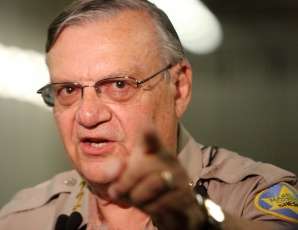 The interview was conducted on the eve of January’s march in Phoenix against Arpaio and for Comprehensive Immigration Reform Now.

According to the organizers some 20,000 participants marched through Phoenix, ending at a county jail.  Although Arpaio‘s public position was that he didn’t care about the march, he ordered the jail’s PA ystem to play loud music as protestors passed.  (Local police estimated the marchers at 10,000.)

A contingent of activists from the Los Angeles area drove to Phoenix to participate. In several cities across the country there were smaller events to express solidarity, one of which took place at Plaza Olvera in Los Angeles, with about 100 participants.

Arpaio – a sheriff with a PR department that would make a US Senator yellow with envy – reacted to the march with a truth and a lie.  All right, many lies.

The truth is that immigration policy is not set by him, but by Congress in Washington.

Oh yes you are, Sheriff.

Arpaio promotes himself as “the toughest sheriff in the West.”  Since 1996, he has been Public Enemy #1 for undocumented immigrants, with the support of a clear majority of voters in his county, who reelected him in 2000, 2004, and 2008.

Last year, the Obama Administration rescinded Arpaio’s authority to make immigration arrests. He blatantly ignored the decision and intensified his raids against undocumented immigrants in Hispanic neighborhoods and factories where they worked, causing panic among the workers and suffering among the families. His activity was justified in the name of a couple of state laws, including one that makes the undocumented immigrants accomplices of their ‘coyotes’ because they pay them for their criminal actions.

For the last ten months the Department of Justice (DOJ) has been investigating whether Arpaio violated federal law in order to decide to indict him or not.  Ten months!

The more blatant Arpaio’s actions become, the more compelled the government is to create a perception of containment…and the more blatantly savage and practically criminal are Apaio’s reactions.

Even though he denies supporting groups like the Minuteman, Arpaio is the armed vanguard of nativists and xenophobes, who frequently wave signs saying «Way To Go Sheriff Joe” at their appearances.

What really enrages Arpaio’s critics is his evident impunity and blatant abuse of power.

Last November, a campaign launched by Presente.org and later expanded to other organizations led to the resignation of anchorman Lou Dobbs from CNN over his obsessive hostility against immigrants.

Is it possible to emulate the success of the Lou Dobbs campaign?

There are many differences between the two, starting with the fact that Dobbs was an employee of a private company. CNN’s profits depend on its ratings and image.

The campaign against Dobbs was initiated just as CNN was about to present their “Latino in America” series aimed at making a favorable impression on Latinos, an important and growing segment of viewers.

Lou Dobbs was costing CNN too much. The network president Jon Klein made a clear, serious, and justified business decision: get rid of Dobbs.

Arpaio, on the other hand, is an elected official.

What is needed to stop him?

He could be recalled. To achieve that, County residents would need to collect enough signatures for a recall election. And some of them have tried, but without success. In February 2008, they recognized they couldn’t achieve enough signatures after a promising start in November 2007.  Besides, the polls gave Arpaio a sizable support of 65% of the electorate even if they had enough votes to place this on the ballot.

Another option is rallying public opinion simply by making Arpaio’s acts public. In this scenario the outcome depends on the media. But outlets such as the New York Times and the Wall Street Journal have been reporting on Arpaio’s acts for more than a decade, without this causing any serious large scale protest.   Moreover, Arpaio attacked journalists who dared to criticize him, even arresting two editors at the Phoenix New Times.

Although they were immediately freed and the charges against them dropped, the attack achieved its goal of intimidation. Other local outlets now use excess caution to cover Arpaio.

As for the judiciary, its situation in Maricopa is no better. Arpaio filed criminal charges against Judge Gary Donahoe of the Maricopa County Superior Court. Arpaio’s hostility toward Donahoe increased after the judge ordered a sheriff’s deputy arrested for illegally taking papers from a defense attorney during a hearing and refusing to apologize as Donahoe ordered.

Together with his staunch ally County Attorney Andrew Thomas, Arpaio filed criminal charges in December against various attorneys as well as a Superior Court judge and County Supervisors Mary Rose Wilcox and Don Stapley.  Supervisor Stanley was arrested three days after the court threw out all 118 counts from the indictment. The judicial path is severely limited by these aggressive tactics, and the obvious schism in the top echelons of County power underscores rampant chaos and havoc.

Another possibility is the federal investigation started last March for alleged discrimination and illegal arrests. Although Arpaio likes to repeat that all attacks against him are politically motivated by his application of the law against “illegal aliens,” the cases pertain also to county employees whose houses were raided at dawn by Arpaio’s deputies attempting to investigate supposed financial improprieties—and to obviously intimidate them.

On January 8th, a week before the march in Phoenix, a Maricopa County spokesman announced that manager David Smith and budget director Sandi Wilson had been subpoenaed to appear the following week before a grand jury investigating Arpaio’s actions.

In short, Arpaio fortified his own shock troops for his political aims, disguised by a uniform, non response to other powers in government and potentially disregard for the federal government.

Arpaio insists in intimidating his critics with force, even when they are part of the government. He defends himself with strong public relations tactics, inciting fringe groups with his anti-immigrant agenda.

For a state based on law, there is a danger in allowing him to continue in power. The  federal government cannot deny the conflict anymore, and even fellow Arizonan, and sometimes ally, Homeland Security Secretary Janet Napolitano must understand this.

An outright confrontation with Arpaio through the possibility of indictment on federal charges by the grand jury would take months, if not years to resolve, causing polarization, politicization and even worse: the appearance of more Arpaios all across the county who will defy the legally established laws which don’t match their objectives.

One possible way to get rid of Arpaio is the popular way. Going back to last Saturday’s march, Arpaio can be defeated through more intense and larger protests which can be expanded to include other states.  This method was successful in March and April 2006 during massive pro immigration protests. These protests were motivated by HR-4437, the controversial project approved by the House of Representatives 239-182 in December 2005.

In Los Angeles alone, approximately 750,000 people marched on March 25th, launching one of the largest protests in American history. This began with a small group of activists who later formed the March 25th Coalition. As a consequence of the protests, the law was all but dead and never reached the Senate, who on May 6th, 2006 announced that it will try to pass its own federal immigration legislation, SB 2611.

It is possible, then, to take the case against Joe Apaio into the larger immigration debate, transforming his loathsome tactics into a spearhead to ignite the immigration movement.  Hopefully this will force the government to realize that to continue to ignore Arpaio and his excesses will be much more costly than confronting him.