So What’s Up With This Arizona Law?

EnglishPoliticaEstados UnidosSociedadInmigración
Por Eric Valenzuela
01/09/2014
Facebook
Twitter
Pinterest
Linkedin
Email
I'm Supposed to be Mexican / Eric Valenzuela
One of the big issues concerning Mexican Americans lately is the passage of the immigration reform law in Arizona. Needless to say plenty of people having been asking me just what I think of the law and what it means to Mexicans on this side of the border both here legally and illegally. Now, I do not want to make this a political column, nor do I wish to advocate one side over the other but to ignore the subject all together would be an egregious oversight on my part.
So let’s examine what the argument. The text of the law, in its entirety, can be found here: http://www.azleg.gov/legtext/49leg/2r/bills/sb1070s.pdf. It’s only about 17 pages and half of that is filled with superfluous language. The gist of it is this: if police are stopping someone for a crime or violation of the law, this could be an infraction, misdemeanor, or worse, if after detaining someone for committing an offense then if the officer suspects the person of being in the country illegally the officer may and shall demand proof of legal residence which should be carried on the person. The law clearly states that race must not be the sole consideration.
Sounds fine, right? I mean, after all, the innocent have nothing to fear, am I right?
Except that they do. Now I’ve got pretty fair skin and speak English with no discernable Mexican accent. But I’ve got some friends and family who have darker skin than I do and speak with a different cadence, say words with a different inflection that makes their English sound a little more Mexican.
Say one of these people was to suddenly have a craving for a delicious, cool, refreshing bottle of Gatorade on a hot Arizona day. It’s 105 degrees out and they’ve been sitting around in their shorts all day. The 7-11 is just two blocks away so our friend grabs a five dollar bill off the counter and shoves it in his pocket and jumps on his bicycle to pedal just a few hundred yards away.
On the way he slows at the intersection and when he doesn’t see any cars in either direction he scoots across, just like he’s done a million times before, just like you me, or anyone has ever done. Whether the light is red or green, especially here in New York or in every subu

rb across America, when there aren’t any cars around you just go.
But this time there is a cop sitting behind the billboard so he jumps out to write up a ticket. No ID, no wallet, just a $5 bill in your pocket… you’ve got dark skin and use a different syntax in your English that he does… now the cop wants to see your green card.
But you’re a citizen, you tell him. You live right down the street. Oh yeah? Prove it. Maybe the cop happens to be having a good day and is nice enough to drive you over to your house and knock on the door- but you already told him no one is home.
And he is not about to enter a house without cause on the word of a suspected illegal alien. So guess what, we’ll just take you to jail until we can sort this thing out. Maybe a few hours, maybe a couple of days later you get to go home. Sorry for the inconvenience, sir.
Have a nice day.
This sort of anecdotal story has already happened to friends of friends and is likely to happen more often in the weeks to come… But racial profiling is against the rules according to the law.
And the policeman wasn’t racially profiling but had a suspicion after he saw the young man riding his bike across an intersection on a red light.
Here’s the problem- the letter of the law seemingly has no racial prejudice. The letter of the law says nothing about skin color or national origin. Theoretically if a British tourist crosses the street having left his passport in the hotel he could very well be deported.
But let’s all be honest with ourselves, the spirit of the law is targeting Mexican immigrants. The law is intended to root out Mexicans who may be here illegally- and even that I don’t have to big a problem with. I would prefer that people who were here illegally were given greater opportunity to integrate fully and become either legal residents or American citizens because for the most of these people, their crime is not being able to wait long enough or have enough money to bribe a corrupt government (Mexico’s) and so they came looking for a better life and greater opportunity.
But I’m realistic. The means and the structure to welcome people in droves- the way we did at Ellis Island so many years ago, just doesn’t exist.
No, for me the problem is that this law forces law abiding, tax-paying, hard working citizens, to be treated as second class citizens because of how they look or speak. Sure the law says race alone cannot be the only consideration but it stipulates the use of “reasonable suspicion” which is entirely up to the officer.
The law does not specify what “reasonable suspicion” entails. So if someone who looks or sounds different happens to forget her purse at work, leaves his wallet at the gym, and crosses the street at the wrong place… he or she is shit out of luck until they can prove they have the right to be here.
Any officer will tell you (especially Highway Patrol), if watch someone long enough, probably just a few minutes, there will probably have a reason to pull them over. Police officers have a very unique power. They have the power to remove someone’s freedom. We grant them this power to do their job effectively along with several other powers.
When someone if breaking the law we expect our police force to act accordingly. Is detaining for several days a guy going to the corner store without his wallet an appropriate use of that power? Especially if he actually is a US citizen?
This is different from wire-taps on people who are communicating with known terror connections. This is different from racial profiling at the airport because face it, we get more people trying to blow stuff up from certain countries in the middle east than we do from Switzerland. In those cases there is an immediate danger of the wanton killing of innocent people. Arizonans have every right to secure their international border when the Federal government fails to do so.
And they should. And when someone commits a crime, not spitting your gum out into the gutter or jay-walking, but a real crime, and it turns out the person is here illegally, then, by all means deport his ass.
But forcing our American Citizens to “carry papers” at all times is just as morally reprehensible to the internment of our Japanese citizens during World War 2.
Many Jim Crow laws said nothing about race. Saying you have to pass a reading test to vote, that doesn’t say anything about race. Saying you are exempt from those types of tests if your grandfather could vote… nothing about race there either.
So, let’s stop playing verbal gymnastics and getting into semantic arguments when we all know that this law violates the liberties of American citizens on the perceived basis of national origin and that is simply, plainly, totally, wrong.
Esta es la parte 4 de un total de 12 partes en la serie I'm Supposed to be Mexican / Eric Valenzuela 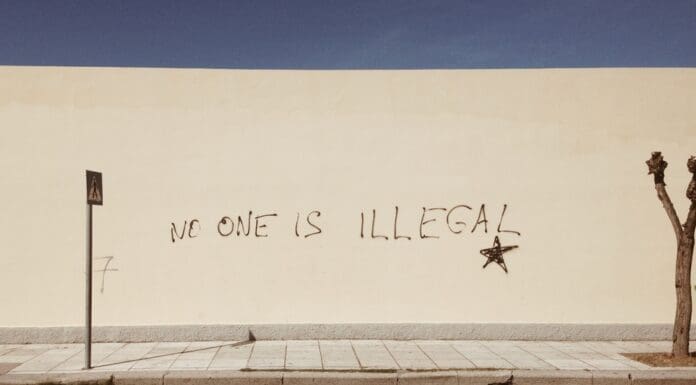