Soccer, a Princess, and a Dirty War 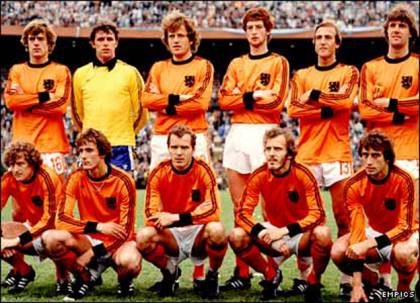 The World Cup is over and Spain is the new champion.  It was a big disappointment for this Argentinean who in that last game of the tournament supported the Netherlands.  My sympathy for the orange team was not related to soccer, but to political events that took place more than a quarter of a century ago, and very far from South Africa.

Of course, it did not begin that way.  At first, I was behind my native Argentina and got so involved in the championship that joined my friends in the Palermo Restaurant, a crowded coffee shop in the San Fernando Valley, in Southern California, where we cheered for “the blue and white.”

Blinded by the excitement, at some point I started to believe that with Lionel Messi, regarded as the best player in the world, Argentina was very likely to win the championship.  But Messi did not shine, and Maradona’s team ended up being smashed by a German hurricane.

With the USA out, and the other Latin American teams being eliminated one by one, it became difficult to decide who to support; specially, considering my multicultural background. After all, I am a citizen of the United States, was born in Argentina, am of Italian, Spanish and French descent, have a close relative from Germany, lived in Brazil and Canada, and love Mexico.

So when the Netherlands and Spain made it to the finals, I had to make a decision and, finally, opted for the land of Rembrandt and Van Gogh.  I announced it in a blog and, as expected, it was not well received by some of my friends who, like many Latin Americans, consider Spain the “Madre Patria,” or Motherland.

Some even called me a traitor, and suggested that my ‘disloyalty’ was related to the fact that Princess Maxima, married to the future king of the Netherlands, is Argentinean.

Quite to the contrary, I hold no sympathy for Princess Maxima, who became Dutch citizen only hours before her royal marriage.  Although we cannot judge children for the actions of their parents, it is very difficult for me to forget that Princess Maxima is the daughter of Jorge Horacio Zorreguieta, a wealthy sugar cane industrialist who served as under-secretary of Agriculture when the military juntas ruled Argentina in the 1970s.

Zorreguieta always made the unbelievable claim that he was not aware that, while he was part of the executive branch, 30,000 women, men and children were assassinated by the security forces of his government. But while Zorreguieta was coveniently ´deaf´ and ´blind´, some soccer players from the Netherlands were well aware of the kidnappings, torture and executions, and bravely helped denounce them to the world.

There were reports that one of them, Johan “El Flaco” Cruyff, felt the moral responsibility of not only denouncing the atrocities of the Argentinean dictatorship, but of also making the difficult decision of boycotting the World Cup of 1978 that took place in Argentina during the military dictatorship.  Other Dutch players followed his example and the team from the Netherlands was, of course, not the best.

Still, the Dutch made it to the finals, but at the end, with General Videla in the stands, were defeated by the Argentineans.   Thirty two years later, again the Netherlands played the decisive game of the World Cup.  I felt that finally this was the time for some kind of historical reparation for that courageous Dutch team that in 1978 refused to shake hands with General Videla and, even more remarkable, that had the kindness of meeting with the Mothers of Plaza de Mayo.

But the Dutch were defeated, and Spain was the new 2010 champion. Unfortunately, my personal dream for historical reparation did not materialize.  Still, the Netherlands continues to be my moral hero, and as a consolation prize (considering that the horrors of the Dirty War cannot, and should not ever be forgotten) General Videla and many of the military mafia that tortured and killed are in jail after being convicted for crimes against humanity.