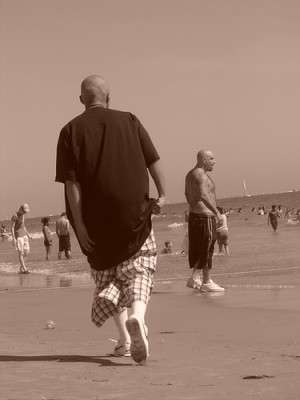 Cholo culture has many aspects and variations on the style. Sometimes a cholo will have a shaved head. Or he might have a long black mane pulled back in a tight ponytail.

A mustache is not uncommon. Various tattoos may adorn the cholo’s body, usually in tribute to Nuestra Senora, the Raiders, his own last name, or a picture of his heina.

Baggy clothes are also the norm but the style of loose fitting clothing is quite different from the urban hip-hop scene. When a vato wants to look good, he doesn’t look for baggier clothing and shiny, plastic bling.

No, the vato is more likely to use some extra Tres Flores in his cholo hair, make sure his mustache is trimmed, and while the clothes may still be oversized, he’ll want to look sharp which means pressed trousers, clean shoes, a starched shirt with suspenders, and a small gold chain that is visible when the vato leans back and looks out at the world before him.

Casual wear consists of khaki chinos or very long shorts, Dickies that reach to or below the mid-calf, a white t-shirt or tank top, and on top of that maybe a long sleeve shirt that is only buttoned at the top.

You can find him in a low-rider Chevy or Cadillac, on a low-rider bicycle, or kicking rocks. A bandana over the forehead, low to the eyes is typical as well, as is a hairnet for his cholo hair, but of course not both at the same time. Plaid flannel jackets come out when the weather gets cold. Oh yeah, and knee-high white tube socks. Can’t forget the socks.

Cholo style is heavily associated with gang culture and this association is not unfounded. I’ve got a few primos who got into their fair share of trouble coming up in East LA. Luckily my parents had the drive and ability to see to it that their progeny did not grow up calling one another “ese”.

Despite the bad seeds who might ruin a party, these are the guys with tear-drop tattoos and a big black 13 on their chest, there is some overlap with legitimate styles and cultures like the low-rider scene, various styles of art including graffiti art like Chaka’s and the tattoo art of the Mister Cartoon.

A great example of how these characteristics merge with various aspects of black culture and Caucasian “style” would be to take a look at the Long Beach Dub scene that was enormously popular in the west coast during the late 1990s.

But for a good, hard look at how the Mexican street gang culture has pervaded a segment of society, watch the 1993 film Blood In, Blood Out (Bound By Honor) or American Me from 1992.

The etymology of the term “cholo” is somewhat ambiguous and the way I am defining it is exclusive to the southwest, Southern California in particular. Anywhere else the term is used it is generally meant to refer to indigenous peoples, those of mixed race, and in its first written usage going back to the early 1600s was synonymous with “mulatto”.

During the ethnic power movements of the 1960s the term was used as a point of pride but in general the title has negative connotations. Prior to that, the cholo scene seems to have evolved out of the pachuco fashion from the 1940s.

I’ll spend some time on the Zoot Suit in the future, but this appears to be the starting point for what would become cholos. This is why the fancier cholos will wear the creased pants and may go for the fedora over the bandana from time to time.

Cholos like to drink and smoke (it’s not all Cheech and Chong but that is the ideal). If they are in a gang or rely on the streets to survive then it isn’t likely that they have finished high school (these are of course generalizations and not hard and fast rules). As such they will have their own localized method of speech, a spanglish all its own.

This isn’t the typical Spanglish where one might say carro instead of coche, or always answer with “que” when “mande usted” would be more appropriate.

No, this is more like saying “watcha,” or “trucha”. They’ve also got a penchant for mariachi music though everyone has always got their own taste, from hip-hop to reggae and rock. And of course, there are the women, the cholas.

Oh, the cholas. A cholo likes a girl whose hair looks wet but when you touch it, it’s crunchy. Dark lipstick, eyebrows that were drawn in with pencil (or a Sharpie marker), and clothing not terribly dissimilar to their male counterparts. These styles have actually found their way into the mainstream as they have at times been picked up by pop stars like Gwen Stefani, Fergie, and Kat Von D. Typically the cholas are girlfriends or sisters of cholos but they have been known to be some pretty rough and tumble chicas in their own right.

So what do you do if you run on to a cholo or group of cholos? For the most part, just like anyone else you pass by on the street if you ignore them they will ignore you. But if by chance they want to engage in scintillating conversation they are likely to ask you where you are from. They are not planning a trip soon, nor are they eager to exchange pleasantries about the subtle differences from one sociological sample to the next. If a cholo asks you where you’re from your reply should always be “Nowhere. I’m from nowhere”.

Just wanted to give you a heads up on that one. In the event you believe you will be deep in cholo territory for any extended period of time you may want to have some Raiders gear on or near you at all times so that a) they may take you for one of them, or b) you can give it as a peace offering or use it to distract them while you pull the knife out of your leg.

Also, don’t let their love of all things Raiders fool you into thinking you can have a chat with them about the NFL. You must never talk to them about football in any greater depth than by simply saying you love the Raiders. This is for two reasons: the Raiders suck and haven’t had a winning season in nearly a decade, and despite their professed adoration for them, cholos don’t know shit about the Raiders other than the colors and the logos.

Also, do not confuse the cholos I’ve described here with the Los Angeles and La Habra restaurant, El Cholo, which serves a delightful deep fried ice-cream.