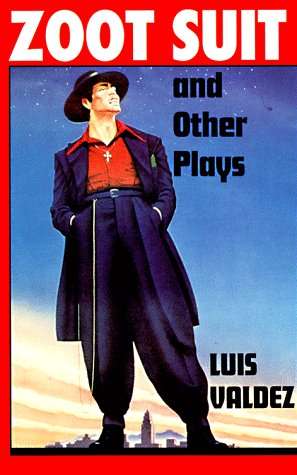 Zoot suits are basically just like any other suit, characterized by a jacket, trousers, sometimes a vest, and often worn with a nice woven shirt and topped off with a hat, often a felt hat or a fedora, and finished off with a gold chain and pointy leather shoes. There is the play, Zoot Suit, which was turned into a film starring Edward James Olmos (see: American Me; see: Stand and Deliver) about the Zoot Suit Riots that took place in Los Angeles during World War II.

The zoot suit, or traje pachuco, was co-opted by Mexican youths from the black community. Black celebrities like Cab Calloway and various jazz musicians during the Harlem Renaissance wore the suits, which they called “drapes,” were aptly characterized by a young Malcom X: “a killer-diller coat with a drape shape, reet pleats, and and shoulders padded like a lunatic’s cell.” A variation of the suit was also worn in 1930s England by teenagers who called themselves “Teddy boys”. Their zoot suits were often brightly colored and had velvet lapels to which all I can say is… well, just leave it to the British to do something like that.

Pachuco’s adopted the style and to this day maintains an influence in Mexican culture in America, particularly in Southern California. Those who “lean like a cholo” do so because the original pachucos leaned back to maintain those pleats in their slacks.

The late 90s saw a brief mainstream revival of the style and attitude, again centered in Los Angeles, during what has been called the swing revival/cocktail movement when big bands and swing music were again en vogue; Swingers is a great example of the era. The origin of the name “Zoot Suit” is probably from the hard “s” sound that native Spanish speakers might use when pronouncing the word “suit” in English and thus is simply the same word repeated twice, once with a heavy Spanish accent and once without.

Dodger Stadium sits on Chavez Ravine where many Mexican immigrants used to reside. During the Great Depression there was already a great deal of racial tension as many Americans felt that these immigrants were taking jobs away from them. I’m glad to see that we’ve come so far since then.

Outside of Mexico, Los Angeles had the highest concentration of Mexicans, and most of them were relegated to the poorest areas and because of discrimination and propaganda were seen as invading outsiders and were forced to work for very low wages. Just like every oppressed culture before and since, these Mexicans created and preserved their own culture- style, dance, language, and dress, which for the youths was all about the zoot suit. Beyond that there were a couple of events that brought Los Angeles to the boiling point.

In 1942 nine men were accused of murdering Jose Diaz at Sleepy Lagoon. This is the story that is the focus of the play, Zoot Suit. During the trial, in order to prevent the defendants from “misleading the witnesses,” none of them were permitted to wash or cut their hair or change their clothes. The nine were convicted and sentenced to long prison sentences though eventually each conviction was overturned. Of course this is the very short version of the case and I highly recommend everyone to take a deeper look into this very interesting case.

The second incident occurred on May 30, 1943. Many military personnel were stationed in Southern California, most of them on their way to the war in the Pacific. No one knows who threw the first punch but there was an altercation between some sailors and some pachucos that led to the start of the riots four days later.

June 3, 1943: a group of sailors again got into a fracas with a group of pachucos, this time the sailors claimed they had been jumped, and with this last straw the LAPD jumped into the fray. Hundreds of servicemen and both on and off-duty police officers jumped into pick-ups and taxi cabs and went around beating up and arresting anyone and everyone who looked Mexican or was wearing a zoot suit. Zoot suits were torn off of whoever was wearing them and burned in the street. At this, the Zoot Suits decided to fight back and for the next several days were the Zoot Suit Riots.

More than 150 people were injured and 500 “latinos” were arrested, charged with everything from vagrancy to rioting. The local press extolled the attacks by the servicemen for the cleansing effect of their attacks. Zoot suits were banned by a city ordinance. The press called it a suppression of criminal acts by the Mexican community. When First Lady Eleanor Roosevelt called them what they were, race-riots resulting from long term discrimination against Mexican-Americans, the Los Angeles Times wrote a scathing editorial, accusing Mrs. Roosevelt of having communist ties and stirring up race discord.

Eventually, like powdered wigs and cravats, zoot suits simply fell out of fashion. They are still worn from time to time by pachucos and vatos who want to dress up. And shops like El Pachuco in Fullerton provide a wide array of colors and accessories. But clearly the zoot suit was more than just a mode of fashion, at least for a time. Zoot suits were a marker of rebellion to some, and an indicator of identity to others. Whether it was worn to provoke or inspire is regardless of the fact that they are some sharp looking suits.

If a bunch of guys from the city want to be hoodlums or thugs, join a gang or cause trouble, or just be part of a scene, there really isn’t much I can do to affect that. But I’ve got to tell you, I would much rather see a bunch of guys hanging around in suits, even if they are ill-fitting suits, than pants that could house several animals, and prints in which a clown would feel silly. At least you can respect someone who takes pride in how they dress.